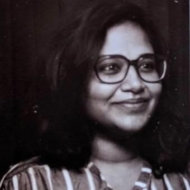 Vatsala is a Los Angeles based cinematographer and camera operator who was born and raised in Kolkata, India.

Her narrative and documentary films have premiered in competition at Sundance, Tribeca, AFI Docs,

Clermont Ferrand, IFFLA and MAMI Film Festival among many others.

the grand jury prize at WIM’s Camaraderie competition. In 2019, “Chromosome 19” and  “A Tale of Two Kitchens” premiered at Tribeca film festival. Her first feature film “The Train Leaves at Four” was recommended on the NFDC Film Bazaar "Viewing Room" list in 2015 and premiered in the “India Story” section at MAMI film festival.

Vatsala is a recipient of the 2020 ASC Vision Mentorship program. She graduated with an M.F.A. in cinematography from the prestigious Film and Television Institute, India and a B.A. in english literature from Calcutta University.