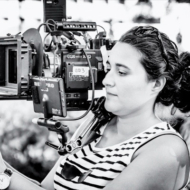 Olga travels around the world shooting versatile content, from narrative feature films to documentaries and commercials, with an eye for crisp and vibrant images that capture the essence of characters and stories.