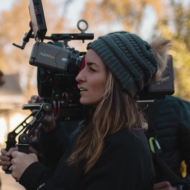 Cinematographer Natalie Kingston was born and raised in a small southern Louisiana town where she ran around with a VHS camcorder on her shoulder shooting her own movies as a young girl.

She has shot multiple feature films and most recently received the Best Cinematography Award at the 2019 New Orleans Film Festival for her work on Brian C Miller Richard’s LOST BAYOU (Tribeca 2019). Variety describes her images as “relaxed and beautiful, capturing the remote milieu’s sunlight-dappled stillness and allure; the film casts an intermittent spell in those moments when it simply lingers on its unique landscape”.

Natalie is continually inspired by the collaborative process of creating a distinct visual language for each film.

Natalie is represented by Murtha Skouras Agency and a member of IATSE 600.