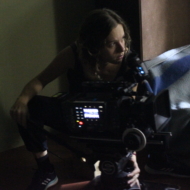 Michele started taking pictures very early in her life, inspired by her parents who both worked as photographers. She worked as camera assistant during her bachelor's degree in Film Studies (Florianópolis, Brazil). After graduation, Michele attended the Advanced Cinematography workshop at Maine Media (USA), also having her first international film set experience in NYC. Later, while living in Rio and then São Paulo, she was part of several film and commercial productions. Between 2018 and 2020, Michele Diniz was a scholarship cinematographer student in Kino Eyes European MA (Portugal, Estonia, Scotland).