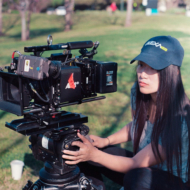 Born in Taiwan, raised in Texas, Ivy Chiu is a cinematographer versatile in both scripted and unscripted filmmaking. Her approach is intentional, authentic, story-driven, and always flexible for an adventure. Ivy has shot projects neck-deep in the Pacific on a remote atoll in French Polynesia, been detained by militia for drone work in Mongolia, and swam to Kalalau Valley while floating trash bags full of equipment to shore. On the “chill side,” Ivy has also DPed multi-cam live events, commercials, episodic docu-series, and narrative feature films--most recently “Inbetween Girl,” a dramedy about a biracial teenager coming to terms with her identity.

Ivy’s work has screened at festivals like Sundance and been broadcasted on national television. Past clients include Facebook, Google, Verizon, and Southwest.

Ivy is a University of Texas alum based in Austin—willing to go wherever the story is.