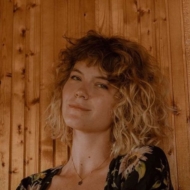 Flora is a Hungarian cinematographer, currently based between Budapest and Vienna, working internationally. She started out in the industry over ten years ago. She has worked her way up in the camera department and worked as an AC for several years.

She holds two master’s degree in cinematography (Edinburgh Royal College of Art-Napier University, University of Theatre and Film Art SZFE). She has worked on several professional narrative short films as well as commercials and music videos.

The short films she photographed have had numerous successes in festivals such as Edinburgh film festival, Vienna Independent Short festival or Shanghai film festival. She earned Jury Special Mention Award for cinematography, Busan IFF, Korea and an Honorable Mention for cinematography at the 13th up-and-coming IFF, Hannover for the project Ecce Homo, which she shot on super 16mm format in 2014. She was the Hungarian nominee for International Award for Best Student Cinematography IMAGO, for the project The longest night of the summer  in 2019.

She has also recently been invited to participate in the ASC Vision Mentroship Program.