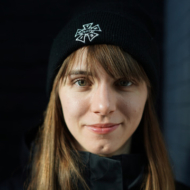 On & off-set, she loves music, activism, and nerdy things.

As a 2nd Unit and Additional Cinematographer, Caitlin contributed to the Netflix original series The Iliza Shlesinger Sketch Show and Friends from College, on which she also operated.

Caitlin shot Ask for Jane, the first narrative feature film about The Jane Collective which Gloria Steinham says “should be seen by every American.” The Nerd Daily called The Tale of the Daughter “one of the most unique and entertaining shorts to have played at [HollyShorts] this year.” FREE THE WORK featured Hollow by artist Hope Littwin in their recent Music Video Round-up. Don’t Forget to Remember released on DUST, a platform for thought-provoking sci-fi content.  On the festival circuit, her films have screened at Cannes, Hamptons, OutFest, Flicker’s RIIFF, Woodstock, Napa Valley, BendFilm, and HollyShorts to name a few.

Her additional cinematography work can be seen on the NETFLIX original series The Iliza Shlesinger Sketch Show and Friends from College, on which she also operated.

Caitlin worked her way up through the camera department on projects such as Netflix's House of Cards and HBO's GIRLS, learning from world-renowned cinematographers and camera operators along the way.